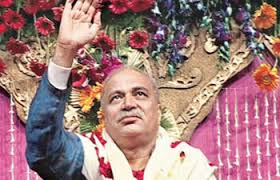 In a sudden turn and twist of events, Nirmal Baba has made it to the congress core committee. He will be advising the government in capacity of the Chief Adviser from next week.

According to our sources, after huge sucess in scams and numerous Police FIRs, it was only a formality for him to be inducted in the Congress committe. “I have always tried to help common man by charging them only Rs 2000 for all my samagams”, said the jubiliant Baba, “It is because of this social work, that I started gaining Krupa and was called by the high command”.

Nirmal Darbar will now be reconstituted with congress ministers filling in the key positions. Baba has a clean image considering no CD has ever been recovered with him in the lead role.

When asked about the new changes he plans to bring in the party and his vision for the future, he has made it clear that no minister will be allowed to eat a samosa with red chutney. “Only Green Chutney will be able to attract Krupa and then she will stay at 7 Janpath for a long time. It will also showcase us as a secular party”, explains Baba.

Expressing content in finalizing Baba, Sanjay Jha said this will be a befitting reply to communal forces and RSS. “Nirmal Baba has never differentiated between Hindus, Muslims, Sikhs or Christians. He has always charged Rs 2000 from everyone”, uttered Sanjay before someone from the Party pushed him away once again.

Reports have it that Baba has been roped in to give third eyes to all congress ministers. “With two eyes, it is very difficult to see what the common man’s problems are. We want to know what else can we do for the common man apart from the Bharat Nirman so isn’t it obvious that we would require the third eye?”, questioned a congress member on condition of anonymity. Later, he changed his mind and asked us to disclose his name as the official bigmouth of the party, Diggy Raja.

Related  From Om NaMo Shivay to the Modi Mantra

Opposition has however termed this as a joke and has alledged that Baba use to distribute Gam in his Samagam. “Woh kehte the Samagam mein aao aur gam mein sama jao”, retorts Ravi Shankar.